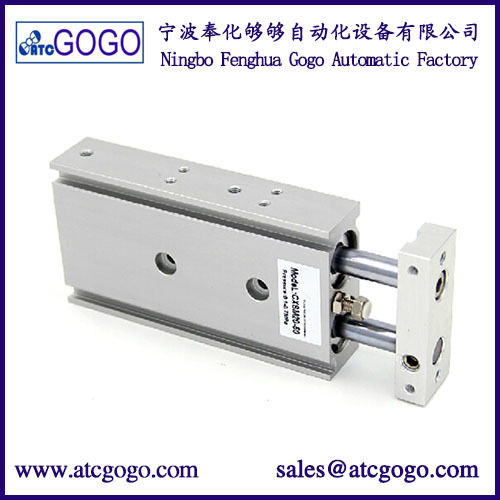 Pneumatic pressure in the compressed gas can be converted to mechanicalenergy pneumatic actuators, cylinders varied species. There cylinderreciprocating linear motion and reciprocating swinging categories (see figure).Reciprocating linear motion of the cylinder can be divided into single-acting, 4double acting, diaphragm and impact of the cylinder.
1. Single-acting cylinder: Only one end of the piston rod side of the pistonfrom the gas to produce poly-pressure, gas pressure pushes the piston to producethrust extends by spring or weight returned.
2. Double-acting cylinder: piston alternately from both sides of the gas inone or both directions output force.
3. Cylinder diaphragm: The diaphragm instead of a piston in one direction onlyoutput force with spring return. It's good sealing performance, but a shorttrip.
4. Impact of the cylinder: This is a new element. It is the pressure of thecompressed gas can be converted to kinetic energy of the piston speed (10 to 20m / sec) movement, in order to do work.
5. Rodless cylinder: no rod cylinder in general. Magnetic cylinders, cablecylinder two categories.
Reciprocating said swing cylinder swing cylinder, the cavity delimited by theblades into two, two chambers to alternately supply the output shaft make theswing motion, the swing angle is less than 280 °. In addition, the rotarycylinder, liquid damping cylinder and stepping cylinder and the like.
Previous:   4 main function of Hydraulic A Next:  About solenoid valves from GOG